Are We Trapped In The Learned And Accepted Divisiveness Of A Perceived Separation? 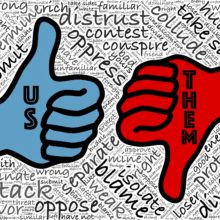 We are facing a great challenge to the state of our humanity …to remain operating as Separate, or move into a functional unity?

This question seems to be brought to the fore once again with all that has been stirred up from the US election of 2016. This article stems from the article “Does the White Working Class Really Vote Against It’s Own Interests? – Part 1” By Joshua Zeitz, published by Politico Magazine online.

Zeitz starts out looking at how decades ago the white working class willingly allowed themselves to be disempowered politically and economically through a bargain …I will term as a tactic of divide and conquer tactic. He poses the questions, “If they did accept that bargain, why? Or are we missing something?” Reading Zeitz’s article will clarify his answers to these and my following perspective.

Early in America, many people were sold on a learned perception of Separation through the enticement that they would feel better by thinking they were special, of higher value, because they were white, and a system was set in place to provide apparent justification for this mindset of being separately special and the continual validation of the Exclusive behavior of “Us and Them”.

This Foundational Perception of Separation and elitism appeared normal as it got passed on to children as The Reality, through the influence of parents and society. 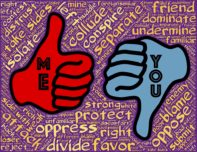 When a person perceives that they are Separate from others because of differences, those differences become continual points of compassion and valuation.

When a person perceives that they are Separate from The Whole of Life, including other people, there is an emptiness and loneliness they seek to fulfill through developing a concept of self identity as a way to perceive self value . This ‘self’ registers and gains personal value in part by favorably comparing itself to other people.

This ‘self’ will think and act more Exclusively in ways that feed, serve, and defend it’s perceived value, with little to no regard for anyone or anything it perceives it is not connected with, unless it has chosen to connected with for some persona gain.

This Perception of Separation spreads like a sickness as children are led through assumption by the explanations and behaviors of parents and society.

All of the behaviors that extol the ‘self’ as being “better than” because of some difference are rooted in a Separation Perception, as with; “Us and Them” and “I’m special”; self valuations based on status, accomplishment, or ownership; nationalism or group allegiance; essentially any time value is derived through comparison.

“To change ourselves effectively, we first had to change our perceptions.” – Stephen R. Covey

This then becomes a persons Way of Being, which appears as Real and Normal, which they constantly seek to perpetuate and feel good about, and which they convey to others … training their babies!

The social system, if initiated by certain individuals who benefited monetarily as the article describes, is then perpetuated as the particular people elevated to feel good about their specific difference were then included on operating the system …this appears later as just the way it is, which serves to indoctrinate the young growing minds looking to figure out life! 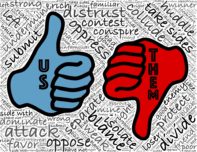 The possessiveness a person has for the benefits they enjoy comes from their concept of ‘self’ as Being, defining, who they are. These benefits are some of what they have collected to define their self value and thus what they feel good about; and why any questioning or challenge to any of it is seen as a threat the who they are, not as just a thing or an idea.

Having the feeling of value and connectedness are natural human traits, which are easily satisfied when an individual Knows they are innately connected to the Whole of Life, to all people. Whereas, when an individual feels they are disconnected and separate, they feel alone and of no value, they are a nothing having to fend for themselves …until they accumulate some perceived value through defining a ‘self’ in order to feel good, and make group connections which help validate these self defining specifics.

This concept of Separation being at the root of all this undesirable human behavior is not easily seen, as the behavior appears as just normal abhorrent behavior, just the way people are. And this has been somewhat validated by the commonly accepted definition of human nature as self-survival based creatures …where, it has been clearly found that human survival and advancement is based on getting together in cooperation …not separation.

The real issue is, we have gotten together in separate groups, which are no more than extensions of a separate defined ‘self’, so there is an “Us and Them” perspective functioning between groups. This has served us well to a point, until these groups clash because they appear as separate.

So individuals in a group get along and cooperate with each other, as long as they are in agreement, but they clash with different groups because they are attached to defined specifics not matching up with those of another group.

“Pit race against race, religion against religion, prejudice against prejudice. Divide and conquer! We must not let that happen here.” – Eleanor Roosevelt

The mind will honor and respect that which it feels connected with, it will consider and treat what it is connected to well, inclusively, even lovingly. However, what it perceives it is not connected with, it will fear and it will think and act in exclusive ways. This patterns of Exclusive self-serving behavior with continue as long as a Foundational Perception of Separation is at the root of how people function.

So, the solution … the only way out of this pattern of perceived Separation and Exclusively ‘self’ serving behavior is for each of us to increase the scope of who and what we perceive and feel connected with …The One Humanity, The Whole of Life.

Individuals and the system will continue to perpetuate, as long as the participating individuals are perceiving a high level of Separation from other people and planet.

Asking, making, or forcing individuals, who are operating through Separation, to “be nice” to all others and respect the planet, will not compute, does not make sense from their perspective …you will be seen as the crazy one ….this is their reality!

We think and behave Inclusively through a perceived connection, our innate Oneness …and Exclusively as disconnected, when functioning through an acquired perception of Separation.

This perception of Separation is an exclusively beneficial Divide and Conquer tactic for the few controlling our society and economics, it prevents total social unification, keeping divided groups fearing and fighting each other more than the manipulation.

In the US we seem to have moved into a state where the middle class has become somewhat more equal, thought certainly not totally; leading this more integrated middle class to cooperate more as a single group challenging the status-quo of the elite controlling few. After the 2016 election, this growing cohesiveness is now being challenged and threatened more boldly, as it is seen as undesirable to those benefiting from a more divided society.

The divide and conquer mechanism of usurping power, which benefits the controlling few, would cease to exist if the majority of citizens were unified as one.

“If his forces are united, separate them.” – The Art of War, Sun Tzu

The question now is, will we individual citizens continue to fall for the enticements of fear and divisiveness as a method to exacerbate and perpetuate our Separation, or will we wake up to realizing and stand up to this exclusively self-serving manipulation?

Will you choose to realize your innate connection, your Oneness with everyone and every thing, or remain divided and influenced through Separation?

Love and Compassion Are Necessities

I've been studying about life, how it works and what we can do with it for over 30 years. This has included many religions, philosophies, spirituality, psychology and sciences along with my own personal discovery and growth. Through all this I have come to feel we are all of one source. We have many varied descriptions of this source and our role within it, with a thread of commonality running through them all connecting our oneness. I feel that our putting more attention to this oneness is what will bring us together as one operating force of love and understanding. It is my purpose to help oneness and unity to become our functional reality. John Halderman